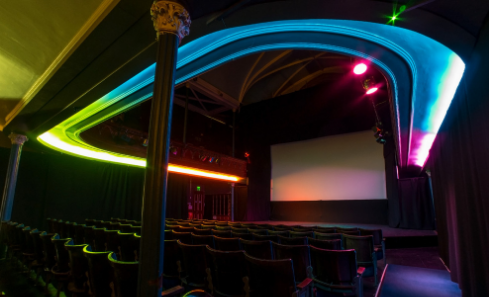 Tickets for the UK premiere of Charlotte Prodger’s SaF05 at The Tower Digital Arts Centre in Helensburgh, Argyll & Bute, on Thursday 27 June are available today, with further screenings at cinemas across Scotland’s west coast, highlands and islands until November.

In a first for the Scotland + Venice partners this newly commissioned work is touring Scotland at the same time as it is being presented to audiences in Venice.

The artist’s most ambitious work to date, SaF05 is the last in a trilogy of videos that began with Stoneymollan Trail followed by BRIDGIT. SaF05 is named after a maned lioness that figures in the work as a cipher for queer attachment and desire.

Each screening will include a short trailer documenting the project development made by Connolly Clark Film and will be followed by a talk with members of the Scotland + Venice team, invited guests and the Professional Development Programme team who have been involved in the development and presentation of Charlotte Prodger’s new commission for Scotland + Venice.

Dates of the full Scottish tour:

Alexia Holt, Associate Director of Cove Park, commented:“We are thrilled to launch SaF05 in Argyll and Bute and at Cove Park’s local cinema, The Tower. The Scottish Tour is a wonderful opportunity for audiences here in Scotland to see this major new work by Charlotte Prodger and we look forward to working with all our partners on this programme as the work tours Scotland’s west coast, Highlands and Islands between June and November 2019.”

Amanda Catto, Chair of the Scotland + Venice partnership, and Head of Visual Arts at Creative Scotland commented: “Scotland + Venice is delighted to be presenting Prodger’s new film to communities across Scotland, with additional funding support from Screen Scotland, Art Fund and Outset Scotland. People who come to the tour will be able to enjoy the film at the same time that it is being premiered in Venice, creating a significant opportunity to reach out to new audiences here.

This initiative also brings Charlotte’s work closer to the rural locations and landscapes that have informed her thinking and practice, making this a unique series of screenings and a very special experience for those who attend.”

Prodger’s new work draws upon multiple sources – archival, scientific and diaristic – and combines footage from a number of geo-graphical locations (the Scottish Highlands, the Great Basin Desert, the Okavango Delta and the Ionian Islands). This autobiographical cycle of the work traces the accumulation of affinities, desires and losses that form a self as it moves forward in time.

Prodger’s preoccupation with perspective, framing and the physicality of the camera as a sculptural device is expanded in SaF05. Film industry cameras, static camera traps, drones and small handheld devices such as Prodger’s smart phone are each used for their inherent material properties. The effects and affects of these technologies are reverberated in the voiceover’s references to optical devices, while vibrating frequencies – bagpipe drone,  cicada mating call, battery alarm – form aural equivalences between animal and human, instrument and machine.

The Dutch arts organisation, If I Can’t Dance, I Don’t Want To Be Part of Your Revolution, who are supporting the production of Prodger’s video work, will lead on a subsequent international tour to the Stedelijk Museum Amsterdam and Mercer Union Toronto in early 2020.