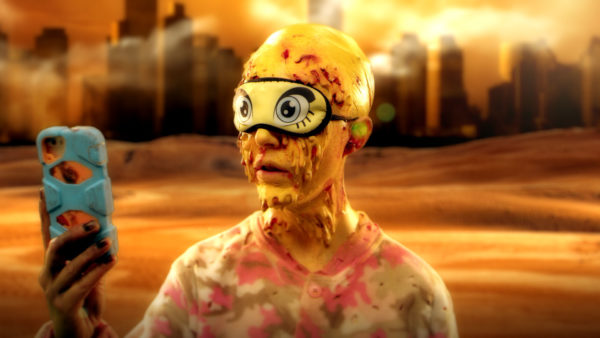 Over 50 filmmakers and artists from around the world will be landing in Hawick on March 2nd for the seventh edition of Alchemy Film and Moving Image Festival. Screening over 120 films at Heart of Hawick, with 24 world premieres, 12 moving image installations around the town, expanded cinema performances and a filmmaker symposium, Alchemy promises to transform Hawick into a melting pot of creativity for some of the world’s most imaginative moving image artists.

Highlights include the Scottish premiere of Rachel Maclean’s It’s What’s Inside That Counts – recently exhibited at HOME, Manchester and at Tate Britain. Maclean, the artist selected to represent Scotland at the 2017 Venice Biennale, is creating a new film commission, inspired by the context of Venice, for a major new exhibition curated by Alchemy Film & Arts. Her work powerfully satirises the fears and desires of our contemporary zeitgeist, cloaked in a super-saturated aesthetic of fairy-tale consumer culture. Maclean will be part of an exclusive Q&A with Alchemy’s Creative Director, discussing the evolution of her work and the themes of her new Venice commission.

Another sprinkling of Venetian magic comes from Alchemy’s tribute to the late John Berger, the Booker-prize-winning author of Ways of Seeing. In a special screening of his 1989 film Play Me Something, also featuring Tilda Swinton and Margaret Bennett, Berger narrates a politicised Venetian romance between a farm worker and a young bohemian woman, to a bemused waiting room of misfits in a desolate airport lounge on the Scottish island of Barra. Directed by Tim Neat, present for a Q&A.

In perhaps the World’s first ever surrealist experimental opera-musical, the UK premiere of Warsaw-based Karolina Bregula’s The Tower, follows the fate of a group of well-meaning community activists who decide that the solution to their social problems lies in building an enormous tower of sugar. With music by Glasgow based Ela Orleans, their utopian dreams inevitably lead toward more dystopian realities.

Expanding the festival’s ethos of conversational encounter into a fifth day, British artist Andrew Kötting will lead a raggle-taggle eight mile procession of artists and miscreants towards the Hermitage Castle and the spectral vision that is Mary Queen of Scots. Reuniting the ghosts of King Harold and his hand fast wife Edith Swan Neck, Kötting’s film-walk culminates in a screening of Edith Walks at Hermitage Hall.

For the closing film, Alchemy hosts the European premiere of Incident Reports by Canadian auteur Mike Hoolboom. An episodic love letter to an unseen therapist, Hoolboom’s film is a luminous celebration of humanity, traversing memory, forgetting, image making and gender identity, while touching the heart of what it is to be in the world. It is an essay film that leads us joyfully to an ultimately life affirming conclusion: “Loving would be easy if your colours were like my dreams: Red, gold, and green.”

“Alchemy Film and Moving Image Festival has become one of Europe’s leading international festivals of experimental film and artists’ moving image. This year we will be screening over 120 films, including 24 World premieres. We are especially delighted to be showing around 20 films made by the Moving Image Makers Collective, our thriving home-grown collective of Borders based filmmakers.”

“The location of the Festival in the border town of Hawick lends the visitor experience a special quality of friendliness and intimacy, an environment in which filmmakers, audiences and volunteers all mix, generating a real outpouring of creativity and conversation.The festival has grown enormously, attracting 1,000 international film submissions this year, and attended by over 50 filmmakers from around the globe.”

“Alchemy Film and Moving Image Festival have a strong international reputation through bold and imaginative programming and we are very proud to continue to support the festival. It has been an incredibly exciting year for the team, with an expanding programme of community filmmaking initiatives coupled with their work with Rachel Maclean due to premiere at the 2017 Venice Biennale. This year’s programme presents an excellent opportunity to experience a showcase of international standard experimental film and artists’ moving image.”

“We are delighted to be supporting Alchemy Film and Moving Image Festival again this year through our National Programme. Scotland is the perfect stage for cultural events, and the festival will undoubtedly prove popular with visitors who will get the chance to see works by some of the world’s most innovative filmmakers and artists, all within the idyllic setting of Hawick.”

For more information, images or to arrange interviews, please contact James Coutts on 07510 011 294 or email james@jamescoutts.co.uk.