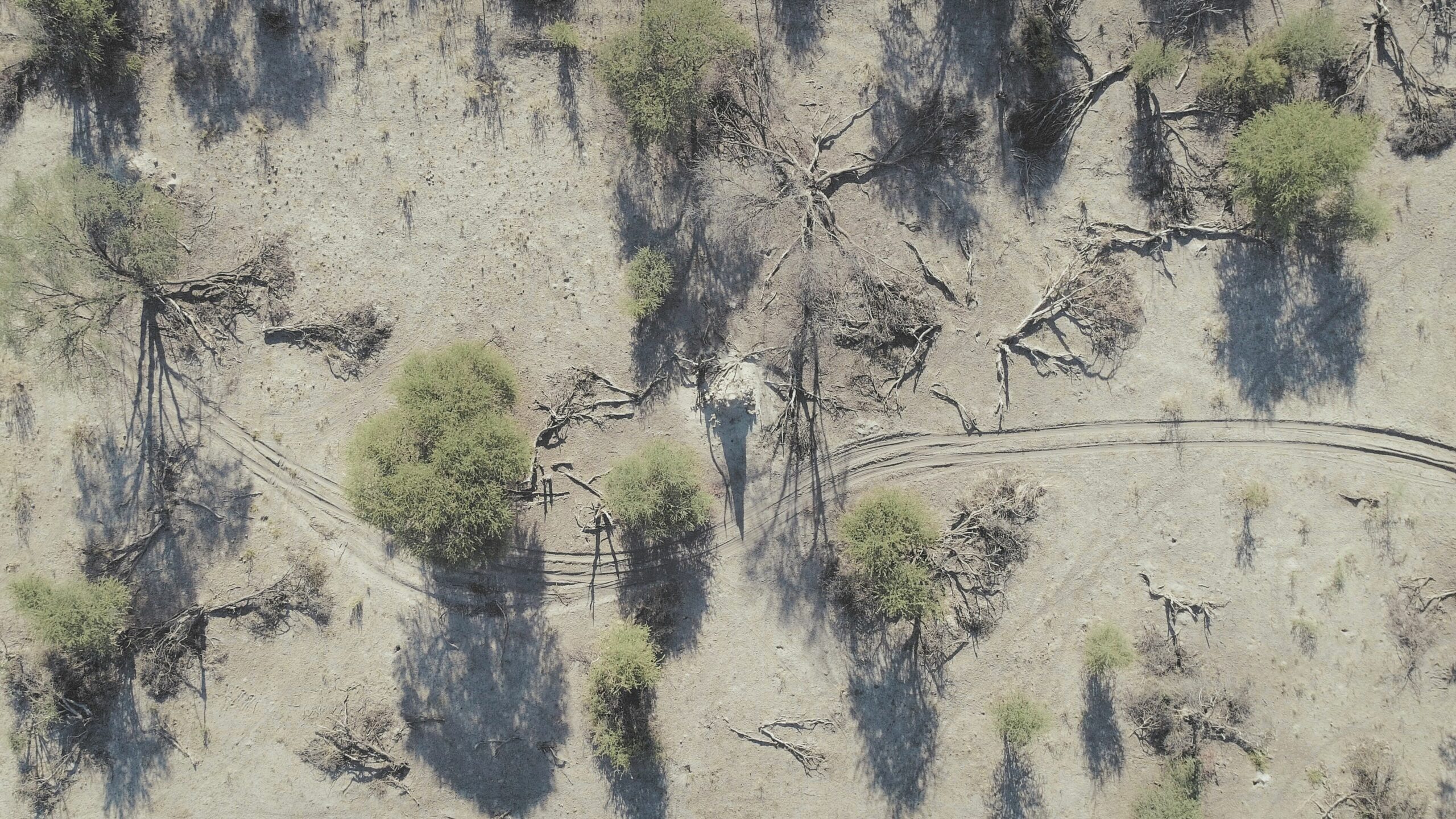 This commission – the artist’s most ambitious to date – is curated by Linsey Young with Cove Park and takes place from 11 May – 24 November 2019 at Arsenale Docks in the utilitarian workshop of a boatyard, repurposed for Prodger’s installation.

Much of Prodger’s work looks at subjectivity, self- determination and queerness. SaF05 is the last in a trilogy of videos that began with Stoneymollan Trail (2015) and was followed by BRIDGIT (2016). This autobiographical cycle traces the accumulation of affinities, desires and losses that form a self as it moves forward in time.

SaF05 draws upon multiple sources – archival, scientific and diaristic – and combines footage from a number of geo-graphical locations (the Scottish Highlands, the Great Basin Desert, the Okavango Delta and the Ionian Islands).

SaF05 is named after a maned lioness that figures in the work as a cipher for queer attachment and desire. This animal is the last of several maned lionesses documented in the Okavango Delta and is only known to Prodger through a database of behaviours and camera-trap footage logged across several years. These indexes of SaF05’s existence are intersected with autobiographical fragments from Prodger’s own life that fluctuate between proximity and distance. Her voiceover traces a chronology of intimate gestures and interpersonal connections from prepubescence to the present, inscribed with the incidental details of territorial delineation, sovereignty and land use. Central to these fluctuations is a tension between macro and micro, the experienced and the described.

Prodger’s preoccupation with perspective, framing and the physicality of the camera as a sculptural device is expanded in SaF05. Film industry cameras, static camera traps, drones and small handheld devices such as Prodger’s smart phone are each used for their inherent material properties. The effects and affects of these technologies are reverberated in the voiceover’s references to optical devices, while vibrating frequencies – bagpipe drone, cicada mating call, battery alarm – form aural equivalences between animal and human, instrument and machine.

Optical, gestural and coded, SaF05’s changes in intensity network the personal and expansive with all their aggregate politics, forming a convergence of diagram and myth, chronology, landscape and identity.

The preview event will take place at the exhibition venue on Thursday, 9 May, from 14–17:30. Robert Wilson, Chair of Creative Scotland, Alexia Holt, Associate Director of Cove Park, and Linsey Young will introduce the new commission and the work to which Scotland + Venice is deeply committed.

In a first Scotland + Venice, Prodger’s new work will tour across Scotland’s west coast, highlands and islands from 27 June to 21 November, at the same time as it is being presented to audiences in Venice.

The Dutch arts organisation, If I Can’t Dance, I Don’t Want To Be Part of Your Revolution, who are supporting the production of Prodger’s film, will lead on a subsequent international tour that will bring the work to the Stedelijk Museum Amsterdam and Mercer Union Toronto in early 2020.

Linsey Young, Curator for Scotland + Venice 2019, said:“Having known Charlotte since 2012 and having had the opportunity to exhibit Stoneymollan Trail and BRIDGIT with her it is a huge privilege to have had some involvement in the development and curation of the final film in the trilogy, her new commission for Venice, SaF05. Charlotte is an artist whose singular and compelling voice resonates with people throughout the world and I am thrilled to be sharing her uncompromising, expansive yet engaging work with the international communities of Venice and at home in Scotland where the work will tour the Highlands and Islands from June 2019. At a time of huge political change in the United Kingdom we are presenting on this most international of stages an artist who for me represents the best of modern Scotland, a bold, critical and politically engaged voice that speaks of the welcoming and forward thinking nature of our country.”

Alexia Holt, Associate Director of Cove Park, said: “Charlotte’s first residency at Cove Park in 2010 came at a key moment in her career, following graduation from Glasgow School of Art’s Master of Fine Art Course. We were delighted to welcome Charlotte back to Cove Park in the summer of 2018 as she began to develop her ideas for SaF05 and to have this opportunity to work with Linsey and the Scotland + Venice partners. We are particularly pleased to be leading on the Professional Development Programme and the Scottish Tour of SaF05, ensuring artists and audiences from across Scotland can take part in Scotland + Venice and see this outstanding new work at the same moment as audiences in Venice.”

Amanda Catto, Chair of the Scotland + Venice partnership, and Head of Visual Arts at Creative Scotland said: “Charlotte Prodger is an artist who makes work of exceptional vision, rigour and integrity. It is a tremendous honour, and a pleasure, for the partners to be working with her on this most ambitious and remarkable exhibition – building on her significant work and achievements to date.”

“SaF05 is an absorbing, enduring and deeply affecting work that will resonate with audiences for some time to come. We are immensely excited to share this work with our international colleagues in Venice and to audiences back home through the Scottish tour.”

“Scotland + Venice has been designed to give artists the opportunity to stage new work within this highly energetic and visible context – and to raise the profile of Scotland as an international centre of excellence for the visual arts.”

The new single-channel video installation byCharlotte Prodger is commissioned and promoted on the occasion of the 58th International Art Exhibition – La Biennale di Venezia, by Scotland + Venice – a partnership between Creative Scotland, British Council Scotland and the National Galleries of Scotland – with funding support from the National Lottery through Creative Scotland.