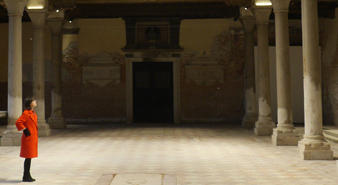 Speaking for the first time about the themes of her new commission, Maclean – at this weekend’s Alchemy Film & Moving Image Festival – revealed that the new work will be a powerful critique of the contemporary ‘post truth’ political rhetoric. Taking the Italian folktale – The Adventures of Pinocchio – as one of the main reference points, the film – written by Maclean in Venice while the UK was in political turmoil over Brexit and Donald Trump was in his political ascendency – explores the dubious language of truth and how this is used and abused to enhance personal, corporate and political power.

An emerging voice in the visual arts in Scotland, Maclean’s work presents a bold and often disturbing vision, creating fantasy narratives involving studio based green-screen techniques, custom prosthetics, costume, and voice actors. Citing Cindy Sherman, Paul McCarthy and Barbara Kruger as early points of inspiration, Maclean plays all the characters in the films herself, while working directly on every detail of post-production.

Maclean’s work raises critical questions about identity, economy, society, connectivity and morality. Spite Your Face, to be unveiled in Venice in May, champions the potential for art to be a critical, transformative and universally self-empowering force. With an unflinching approach, Maclean’s new commission will critique the underlying fears and desires that characterise the zeitgeist we find ourselves in, confronting these dynamics of status, power and consumption.

Betraying an uncannily prescient awareness of societal trends and hidden personal anxieties, Spite Your Face will illuminate the power dynamics of our globalised world, examining the manifestation of corporate greed, aggressive consumerism, political authority and sexual power, in opposition to personal conscience.

Maclean’s commission will be presented within a new space for Scotland + Venice: the dramatic deconsecrated church, Chiesa di Santa Caterina, Fondamenta Santa Caterina, in Cannaregio. Originally established to uphold moral authority and political-religious power, this venue now offers a new context for Maclean’s work, cutting across cultural divides to question notions of truth, conscience and power in the 21st century.

Scotland + Venice was founded in 2003 to promote the best contemporary art from Scotland on an international stage, supported by Creative Scotland, the National Galleries of Scotland and the British Council. Maclean’s exhibition is curated by Alchemy Film & Arts in partnership with Talbot Rice Gallery and the University of Edinburgh.

The UK premiere of Spite Your Face will be held at Talbot Rice Gallery in early 2018.