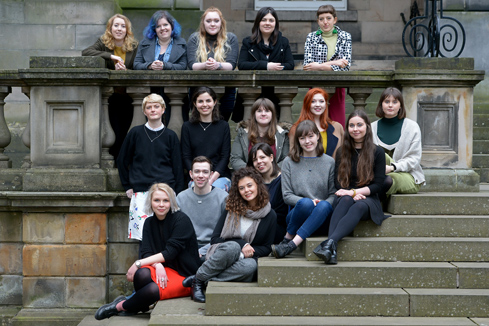 The Scotland + Venice partnership is delighted to announce that fourteen art students from six Scottish art colleges have been selected for the Professional Development Programme as part of the Scotland + Venice presentation of a solo show of new work by Rachel Maclean at the 57th International Art Exhibition – la Biennale di Venezia (13 May – 26 November 2017).

Working closely with Scotland + Venice and Alchemy Film & Arts, Talbot Rice Gallery and the University of Edinburgh have been spearheading the programme, initiating the partnerships with colleges across Scotland including Borders College, City of Glasgow College, Dundee’s Duncan of Jordanstone College of Art & Design, Edinburgh College of Art, The Glasgow School of Art and Aberdeen’s Gray’s School of Art, Robert Gordon University.

Eleven undergraduates and three graduates from the six art schools will take part, acting as ambassadors for Scotland in Venice, highlighting the importance of Scotland’s involvement in the Venice Biennale – the largest and most prestigious visual art exhibition in the world. Students in Venice will be involved in welcoming visitors, assisting with events and screenings, informing visitors about Rachel Maclean and her new work, and maintaining the project’s online presence, informing readers back home and in Venice about activity on the ground. For these participants, it is also an opportunity to learn new skills and to expand their network of artists and art world peers, inspired by the unique context of the Venice Biennale.

The Scotland + Venice Professional Development Programme began fourteen years ago in 2003. Since then, the programme has provided the opportunity for over eighty students from eight colleges to spend time in Venice alongside like-minded artists, experiencing the distinctive setting of Venice and expanding their own practice.

Following a gathering this past weekend in Edinburgh, the group will meet again in Scotland in April 2017 for training before travelling in pairs to Venice for four weeks each, over the duration of the Biennale.

“The programme offers arts students from across Scotland a valuable experience to work with the curatorial team, to build new professional relationships, and to develop a much deeper understanding of the context in which they practice as artists whilst getting to experience the very best international contemporary art from across the world.”

“I am excited for this opportunity as it is a chance to connect with other artists, experience a difference culture and improve my own work. I plan to share my experience with my fellow students at Borders by documenting my time there, artist that I meet, films I see and creating a presentation for class, as well as on my online blog.”

“I was part of the invigilation team for Scotland + Venice 2007 where I worked alongside young artists from across Scotland. Many people I worked with and met there became good friends and important collaborators. Spending 12 weeks in Venice was an amazing experience, and has been integral to my subsequent artistic and curatorial career. I am delighted to lead the Professional Development Programme for Scotland + Venice 2017 on behalf of the University of Edinburgh, and to make sure that this opportunity is equally significant and enjoyable for this year’s participants.”

“Art schools provide permissive environments for students to test out and make manifest their ideas and this is critical for their development as artists. However it is equally important that they understand and engage with the context that they will move into once art school education ends. This programme provides vital experience of working in a social role, engaging with public, working with established artists and absorbing all that the Biennale and the city offer. The selected students will work with each other from School and Colleges across Scotland making contact with teams from other pavilions and this network will provide them and their peers with fruitful connections for the future.”

1. Scotland + Venice is a partnership between Creative Scotland, the National Galleries of Scotland and British Council Scotland.

Rachel Maclean’s presentation for the 2017 Venice Biennale is commissioned and curated by Alchemy Film and Arts in partnership with Talbot Rice Gallery and the University of Edinburgh. The presentation take place at a new venue, Chiesa di Santa Caterina, Fondamenta Santa Caterina, 30121, Cannaregio.

The 2017 exhibition is the eighth Venice Biennale presentation by Scotland + Venice, running from 13th May to 26th November.

2. Based in Glasgow, Rachel Maclean (1987) was educated at Edinburgh College of Art where she completed her BA in Drawing and Painting in 2009. Her work came to prominence in New Contemporaries 2009 and she achieved significant acclaim through her British Art Show 8 hit Feed Me in 2016. Rachel was nominated for the Jarman Award in 2013 and 2016. In 2013 she won the Margaret Tait Award. Rachel premiered a new commission at Frieze Art Fair as part of Frieze Film 2016. Her work is the subject of a solo show at Tate Britain, as part of the Art Now series, on view until April 2017.

4. Talbot Rice is the University of Edinburgh’s public art gallery. As the project’s creative and academic partner, Talbot Rice Gallery will host Rachel Maclean’s work from the Venice Biennale in early 2018. Founded in the early 1970s, Talbot Rice has an influential national and international reputation founded on its exhibition and integrated education programmes. In the last decade the Gallery has curated exhibitions with some of the most influential artists in the world, including: Luc Tuymans, Jane and Louise Wilson, Joseph Kosuth, Jenny Holzer, Lucy McKenzie, Alasdair Gray, Mark Dion, Rosemarie Trockel, and Tim Rollins.

5. Creative Scotland is the public body that supports the arts, screen and creative industries across all parts of Scotland on behalf of everyone who lives, works or visits here. We enable people and organisations to work in and experience the arts, screen and creative industries in Scotland by helping others to develop great ideas and bring them to life. We distribute funding provided by the Scottish Government and the National Lottery.

7. British Council Scotland’s mission is to build long-term international relationships and trust between the people of Scotland and other countries through the exchange of ideas, knowledge and information in the arts and education. Our involvement in the arts arena stretches back to 1947 when we helped to found the Edinburgh International Festival and every year we continue to work on new and exciting cultural projects connecting Scotland and the world.