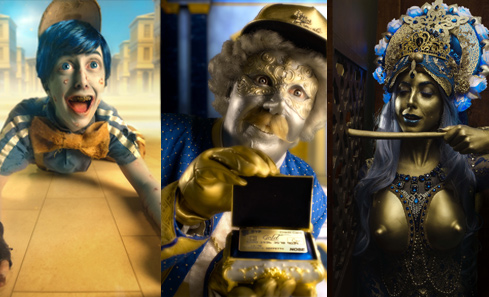 The University of Edinburgh have announced their acquisition of acclaimed artist Rachel Maclean’s new film commission for Scotland + Venice, Spite Your Face, premiering at the 57th Biennale di Venezia. Her most ambitious work to date – presented within a dramatic deconsecrated church in Venice – has been acquired by the institution that the artist attended.

Maclean graduated from Edinburgh College of Art (ECA), which is part of the University of Edinburgh in 2009.

The film, a post-truth dystopia alluding to the recent changes in the political climate, references the potential implications of Brexit (to “cut off your nose to spite your face”) and satirises the language of today’s political leadership, where the language of truth and untruth is employed, with little regard for factual accuracy. A modern fairy-tale drawing upon the Italian folktale, The Adventures of Pinocchio, the film is positioned at the altar of the former church, Santa Caterina, as an eight metre high projection.

“I’m so excited about the acquisition and humbled to be represented alongside such an impressive and important collection of artworks. ECA has been hugely significant in my development as an artist. My experience studying Drawing and Painting and the inspirational people I met at the college was life changing and I’m delighted to be currently tutoring on the dynamic Fine Art Post-Graduate course.”

“Rachel Maclean is one of the most highly regarded contemporary artists working in Scotland today. As both a graduate of Edinburgh College of Art and Scotland’s representative on the world stage at the Venice Biennale, the acquisition of Spite Your Face to the University’s Art Collection is hugely significant. This will provide an ongoing legacy for Scotland + Venice 2017 and celebrate the University’s key role in the overall project.”

An emerging voice in the visual arts in Scotland, Maclean’s work presents a bold and unique vision, where she creates fantasy narratives involving studio based green-screen techniques, custom prosthetics, costume, and voice actors.

Citing Cindy Sherman, Paul McCarthy and Barbara Kruger as early points of inspiration, Maclean plays all the characters in the films herself, while working directly on every detail of post-production. The news comes just over a year after the Scottish National Gallery of Modern Art acquired Maclean’s previous film commission, Feed Me, presented as part of British Art Show 8.

Check out this Facebook Live for an exclusive tour of the exhibition with Rachel Maclean and Richard Ashrowan.

See a behind-the-scenes glimpse into Rachel Maclean’s new work in this film commissioned by the British Council: