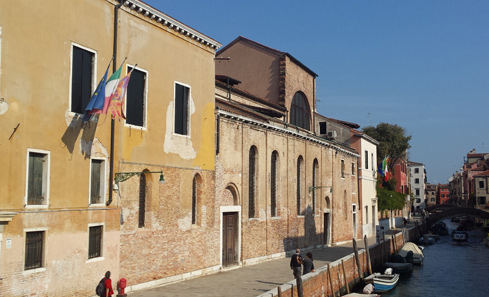 The Scotland + Venice partnership is delighted to reveal further details about Rachel Maclean’s solo presentation: the new venue for the exhibition has been selected, and the Producers of the new film commission have been chosen.

Presenting a major solo presentation of new work in Venice, representing Scotland at the Venice Biennale, the Glasgow-based artist is also premiering a new commission at Frieze Art Fair this week as part of Frieze Film 2016; has an upcoming solo show of new work at HOME in Manchester in October 2016 and at Tate Britain, as part of the Art Now series, in November 2016; and is shortlisted for the 2016 Jarman Award, which is announced on 28 November 2016.

The Scotland + Venice partnership and the artist have chosen a new venue for the project: Chiesa di Santa Caterina, Fondamenta Santa Caterina, 30121, Cannaregio – a deconsecrated former church which is now part of the Collegio Marco Foscarini (vaporetto stops: Ca’ D’oro or Fondamenta Nove). The venue has an impressive interior space, offering a new kind of environment in which to house Maclean’s work.

The presentation will be centred around a major new film commission, for which the Producers have just been selected: the Glasgow based production company, Barry Crerar, recently set up by producers Rosie Crerar and Ciara Barry. The duo are the only Scottish recipients of the BFI’s recently announced Vision Awards, and Rosie Crerar has also just been selected for the BAFTA Scotland committee for 2016-17.

“The Chiesa di Santa Caterina is a beautiful venue, filled with so much history and power. I’m incredibly excited to create a new work that will transform this space – and provide a new context for my work. I’m also thrilled that Barry Crerar have been selected to produce the new commission, and look forward to working closely together over the coming months!”

“The dramatic and historic space that Chiesa di Santa Caterina offers will be an excellent venue for Rachel’s work. A former church in a beautiful location, the venue has scope for huge impact, and provides Rachel with an unprecedented opportunity to develop new work in an exceptional context. We look forward to welcoming visitors from across the world during the seven months that the exhibition will be on show.”

An Edinburgh College of Art graduate, Rachel Maclean works across film, print and photography to comment on popular culture through a range of fantasy narratives where invented characters, all modelled and played by the artist herself, explore issues of identity, social values and politics. Her work draws on a range of inspirations, including TV talent shows, horror movies and advertising, incorporating the latest techniques in film with traditional theatre.

1. Scotland + Venice is a partnership between Creative Scotland, the National Galleries of Scotland and British Council Scotland. Rachel Maclean’s presentation for the 2017 Venice Biennale is commissioned and curated by Alchemy Film and Arts in partnership with Talbot Rice Gallery and the University of Edinburgh. The 2017 exhibition is the eighth Venice Biennale presentation by Scotland + Venice.

2. Based in Glasgow, Rachel Maclean (1987) was educated at Edinburgh College of Art where she completed her BA in Drawing and Painting in 2009. Her work came to prominence in New Contemporaries 2009 and she achieved significant acclaim through her British Art Show 8 hit Feed Me in 2016. Rachel was nominated for the Jarman Award in 2013 and is again shortlisted this year. In 2013 she won the Margaret Tait Award. Rachel is premiering a new commission at Frieze Art Fair this week as part of Frieze Film 2016 and her work is subject of a major solo show opening at HOME in Manchester in October and Tate Britain, as part of the Art Now series, in November 2016.

4. Barry Crerar is a new production company recently set up by producers Rosie Crerar and Ciara Barry who have a background across film development, production and exhibition. As the only Scottish recipients of the BFI’s recently announced Vision Awards, they now form a long anticipated partnership to produce contemporary, outward-looking and transformative feature films from Scotland. Alongside this slate of narrative films, they have previously worked with artist filmmakers Henry Coombes, Duncan Marquiss and Phil Collins.

5. Talbot Rice is the University of Edinburgh’s public art gallery. As the project’s creative and academic partner, Talbot Rice Gallery will host Rachel Maclean’s work from the Venice Biennale in early 2018. Founded in the early 1970s, Talbot Rice has an influential national and international reputation founded on its exhibition and integrated education programmes. In the last decade the Gallery has curated exhibitions with some of the most influential artists in the world, including: Luc Tuymans, Jane and Louise Wilson, Joseph Kosuth, Jenny Holzer, Lucy McKenzie, Alasdair Gray, Mark Dion, Rosemarie Trockel, and Tim Rollins.

6. Creative Scotland is the public body that supports the arts, screen and creative industries across all parts of Scotland on behalf of everyone who lives, works or visits here. We enable people and organisations to work in and experience the arts, screen and creative industries in Scotland by helping others to develop great ideas and bring them to life. We distribute funding provided by the Scottish Government and the National Lottery.

8. British Council Scotland‘s mission is to build long-term international relationships and trust between the people of Scotland and other countries through the exchange of ideas, knowledge and information in the arts and education. Our involvement in the arts arena stretches back to 1947 when we helped to found the Edinburgh International Festival and every year we continue to work on new and exciting cultural projects connecting Scotland and the world. www.britishcouncil.org/scotland